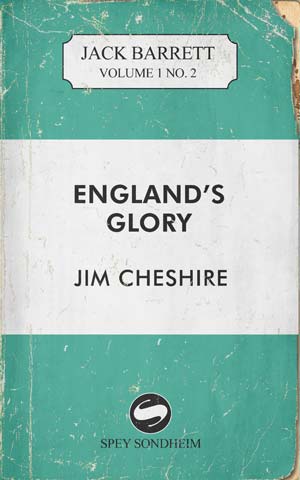 This series is the most consistently published work by Jim Cheshire. It was being written before he even knew it was a novel, never mind a series.

From notes in an old diary to the margins of written schoolwork, short sentences and observations started to coalesce into something that took years to put together as a string of events.

A month before leaving school, it really looked as though the first episode had been written. Well, it had... but extremely badly. It looked like a long version of all the late night rubbish that came out of the aimless plagiarism of books and styles that we are told are 'good' writing.

Maybe they are, but they're no good for anyone but the writer who has made it their own. The first draft was called 'Slow Burning' and was thrown away with almost indecent haste.

A year later, a second version was attempted, written in a few months with a whole fresh approach.It turned out not to be so fresh, just a thawed out pastiche of somebody else's vision. It hung around on the desk for a few months and went in the bin.

Several other things got started in the meantime, but were never finished. A brief sojourn in Wales, followed by the prospect of being lost in the world of wage slavery, brought the old Remington typewriter back to the desk with a fresh sheet of pristine paper.

In the early days of 1981, a third version began. A philosophy of desperation led to the reduced instruction set of simply writing down the chain of events that appeared in the mind's eye. No stylistic embellishment, no cloak of wordy smugness. Just the events that happen and the words that are spoken. England's Glory was finished before the summer, and this time, it was the real thing.